Edit
watch 01:40
The Sandman Will Keep You Awake - The Loop
Do you like this video?
Play Sound

In the Blade universe, vampires are grouped into twelve major political bodies called houses. Whereas the films each featured only a single vaguely-defined faction, the TV series explained that there are twelve houses, of which five are explicitly mentioned.

Glyphs are used as the written form of the Vampire Nation's secret language, and appear on keyboards, binocular HUDs, and computer GUIs.

Each House uses a unique glyph to signify ownership of persons (in the form of tattoos) and places (in the form of ultraviolet-spectrum graffiti). Individual vampires, like Frost and the White Prince, are known to use glyphs of their own.

Tribe of Ligaroo Glyph (later recycled for the House of Leichen)

Tribe of Pallintine Glyph (later altered for Damaskinos and Chthon) 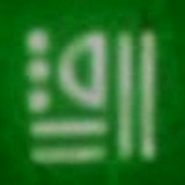 Damaskinos' Glyph (seen at the House of Pain) 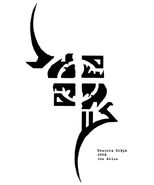 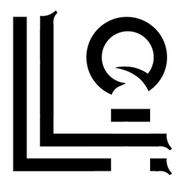 This house first appears in the film Blade and is the house that the antagonizing vampires belong to. It is ruled by a "Shadow Council" of 12 purebloods, and also treasures the book of Erebus (a vampire bible). The house takes its name from Erebus, the ancient Greek god of darkness and shadow.

The purebloods on the council are divided into eleven "tribes," with a common name and tattoo design being particular to each. In Blade, Deacon Frost (Stephen Dorff) uses the vampire council as part of his plan to raise the Blood God. The transformation ritual in the Temple of Eternal Night allows the various powers of each vampire type to be transferred to Frost, conferring on him the powers of La Magra.

The House of Erebus reappears in the series as one of the twelve vampire houses, playing a minor role in the episode "Turn of the Screw". In keeping with the depiction in the film, the house is described as "conservative". The house was planned to have a major role in the series' second season.

In a previous conception of the film, the eleven tribes of the House of Erebus were to be distinct socially and biologically, but in the final cut of the Blade film they were reduced to simple surnames to provide a mutlicultural flavor. Their origins and powers are briefly detailed in a special feature on the Blade DVD, but this information is not canonical. The concept of eleven distinct tribes was later revised into the concept of twelve distinct houses in the series; the Pallintine and Ligaroo glyphs were recycled as the Chthon and Leichen glyphs, respectively.

The Ashe Tribe are the most sensitive to those elements most traditionally used to combat vampires. Ultra violet rays, sunlight, silver and garlic all have a stronger effect on these vampires.

This Cianteto Tribe is from Mexico, supposedly raised from the dead by the same witches that gave Montezuma his immense power. A warrior caste, they have the strength of ten men and regenerate limbs lost in battle.

The Dragonetti Tribe are influential sorcerers dating back to pre-Medieval times, who were reincarnated and returned to Europe. They consider themselves as the first pure bred vampires.

The Faustinas Tribe are believed to have gained their “pure blood” status by practicing Santería. Along with physical strength, they also can control minds, matter and the elements. Faustinas can only be terminated with a silver stake though the heart and must also be decapitated or they will be reborn with more power than they possessed before. The House of Erebus has twelve members and eleven tribes, two seats being held by the Faustinas identical twin female leaders.

The Lemure Tribe of Rome were originally evil spirits that inhabited corpses and turned the dead into immortal night stalkers. Known for their ability to seduce their prey, they are beautiful denizens of the dark and frequent underground raves and Goth clubs.

The Ligaroo Tribe of France shed their skin during the night, turn into a ball of fire and methodically stalk their victims. They feed from the jugular of their prey and are the only Vampires that store blood for later use.

This marking signifies members of the Lobishomen Tribe who are linked to the werewolves of Brazil. It is believed that the original Lobishomen were killed by a werewolf and returned to the earth as a vampire. Given the number of deaths attributed to werewolves, the Lobishomen is the largest clan in the House of Erebus.

The Tribe of Pallintine hails from the Baltic region and are some of the wealthiest industrialists in the Vampire Nation. Their vast wealth has allowed them to blend into society somewhat invisibily.

The Upier Tribe are born with a full set of teeth and razor sharp fangs. Originally from Eastern Europe, these vampires are particularly lethal and feared because of their ability to hone their deadly skills at a young age.

The Von Esper Tribe are the most violent and ruthless members in the House of Erebus. They are efficient assassins and are easily swayed or involved when bloodshed is to be taken.

In the film Blade II, the overlord Eli Damaskinos is depicted as leader of the "vampire nation", apparently heading an independent house. The position in regard to other houses mentioned in the films or the series is unclear.

The Blade II video game features three different vampire factions that are connected to each other: the Arcans, Byrons, and Karkovs. It is unknown if they constitute three separate houses or three factions of one house.

A pureblood member of the Karkovs mentioned that Damaskinos was their former overlord, but does not specify if this refers to only the Karkovs or to all three factions.

This faction appears to have reapers and is involved in genetic engineering. Project Vorpal was an experiment that they were carrying out at the Gaunt Moor Asylum to create the perfect vampire. They also appear to be involved in black magic rituals as they are harvesting dark energy from the lifeforces of human beings.

This faction is supposedly one of most extreme groups of vampires there is as they use suicide bombers and some of the vampires in this faction have cybernetic limbs. They are also heavily involved in genetic engineering as the player encounters many of their test subjects throughout their mountain base as well as embryo cases similar to the ones Damaskinos uses. They might also be involved in dark rituals like the Byrons because they have dark energy stored in their mountain base.

In the third film, the antagonizing vampires are grouped into an unnamed house. This group is involved in genetic engineering, the draining of humans in blood farming facilities, and is also responsible for resurrection of Drake.

Affiliations in Blade: The Series[]

The series was the first to explain that the vampire nation was divided into twelve houses. Only a few of them are featured in the series itself, with the rest appearing only by name or not at all.

The House of Chthon is the focus of the series and first appears in the pilot. One of the most powerful vampire houses, the Chthonians are elitists who consider themselves the leaders of the Vampire Nation, though this position is not universally accepted and especially challenged by the Armayans. The house was founded by Lord Chthon, and his sword became their sacred relic. The House of Chthon has a violent history, and many of their purebloods were slain in a past war against the House of Erebus.[1]

Chthon is an ancient Greek word meaning "earth" and, by extension, "the underworld". Also, in the history of the Marvel Comics universe (from which the character of Blade originated) Chthon is the name of an Elder God that spawned the original vampires.

In parallel to film's depiction of the Shadowy Council of Erebus, Chthon is headed by a council of six pureblood vampires, which is called the Conclave. These purebloods were destroyed by Van Sciver, automatically advancing him to head of the house.

First mentioned in the series' pilot and then in the episodes "Descent" and "Bloodlines", the House of Leichen consists of vampires that have sworn off of killing humans, and drink only cloned blood. They believe that murdering to feed is wrong and pollutes vampires. They are the only house to conduct the Blood ritual which connects a vampire with those they have turned.

"Leichen" is the plural form of the German word "Leiche", which means "corpse".

First mentioned in episode "Descent," the House of Armaya is an exiled house with only one pureblood and no seat on the vampire council. They were the catalyst of the civil war that divided the Vampire Nation. After the uprising was quelled, the Armayans were scattered throughout the world and became largely associated with organized crime. They are considered the "gangsters and thugs" of the vampire world. The house of Chthon uses members of Armaya in their experiments to create Aurora, which triggers further conflict between the two houses.

First mentioned in episode "Bloodlines", the House of Saqqara, has lower standards than the average vampire house, and will let outcasts join their ranks.

Saqqara is the modern name for the necropolis of the ancient Egyptian city of Memphis.

Mentioned on sneekpeaktv.com, and other webpages that were discussing the details of the series, the House of Falsworth was supposed to be in the pilot. There was a vampire killed in Russia that was not linked to a specific house; and this house was not mentioned in the pilot.[2] Falsworth is the last name of the Marvel villain Baron Blood.

Nothing is known of these two houses. The names appeared on a piece of tape on a wall behind Blade in the episode "Hunters".

Community content is available under CC-BY-SA unless otherwise noted.
Advertisement